Ah, here we are again. The part where I try to keep you entertained while 21 or so pictures that you're only vaguely interested in load. Hmmmm....perhaps it's best if you read verrrrry sloooowwwly. Or maybe you should get high speed internet if they're still loading, hmmm? Or maybe you've got it and they're already loaded and you're just still reading this to see what sort of drivel I'll come up with to try and keep everyone entertained?

First of all, some of these pictures are older than others, some are from last week (Tuesday? The 13th??) of when Richard/Postrophe and I went out with Lori/Ladypixel, Gary/Kingu and Amber/Moonshine246 (collectively known as OCBTracker....are there enough various names for everyone yet? Ah, the wonders of the internet...) to do some geocaching late at night and some are from today, the 17th of July I think, when Martin/Thudpucker/Rimshot and I went out caching while hanging with my dad and stepmom Lydia.

Well, fine, I lied, the first picture below is a bit older, it's a picture of three different travel bugs waiting to be stuffed back into the Burbank Travel Bug Check In. From right to left we have Thrillium (the dog), cache cop and Felix, sitting on top of a box that Ladypixel will be turning into a new huge-ass cache any day now. 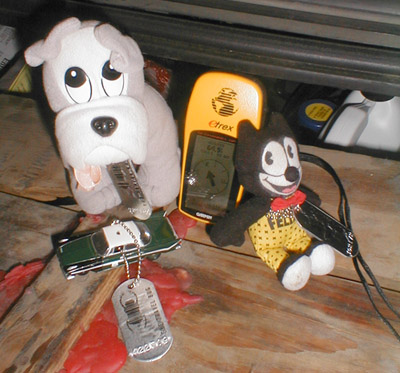 Here's Amber with a new stuffed toy given to her by another geocacher, possibly just for being cute. Notice she is being either stalked by a ghost or by a highly reflective piece of dust. FYI, this picture was taken right near the Daddy's Sweet Baby cache. 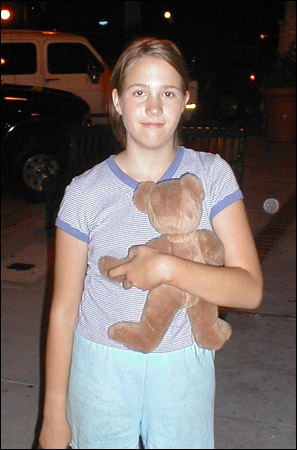 Speaking of which, that's where I found the OCBTracker Living Lori travel bug! She may not fit in a lot of cache boxes, but she certainly travels around to more caches than most travel bugs.... 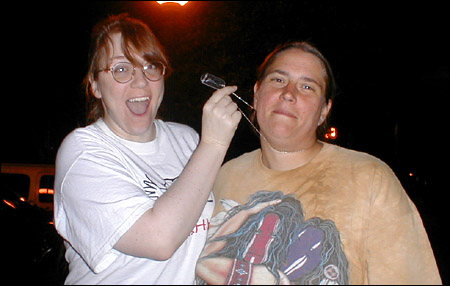 Amber wanted a picture of her bear with their Magellan GPS unit. Awwww..... here you go. Ain't he cute? 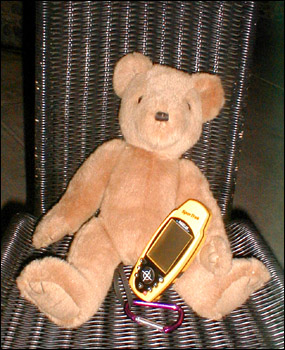 The main point of going to the Ontario/Upland area today was to visit and spend time with my dad and Lydia. We looked up a couple caches just in case and when we mentioned them to Lydia she got all interested, so we ended up going to two with the two of them. The first one is Local Flavor and is at the Graber Olive House. It's a big place so it's really no gimme to tell any cachers where it is. The place is very cool, BTW, as the picture will show. Notice below how green and comfy-looking the place is, and the olive press in the back left corner there. 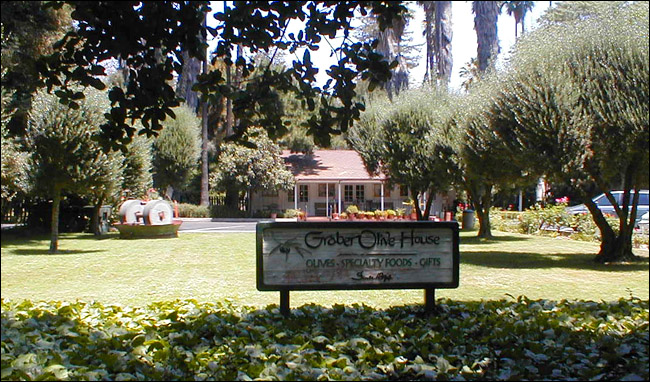 They had several exhibitey museumey bits set up including this little house here. We didn't really have time to see everything there, not even half, but we did get time to take a bunch of pictures and realize how cool the place was. Notice the old timey cach register in the background here.... 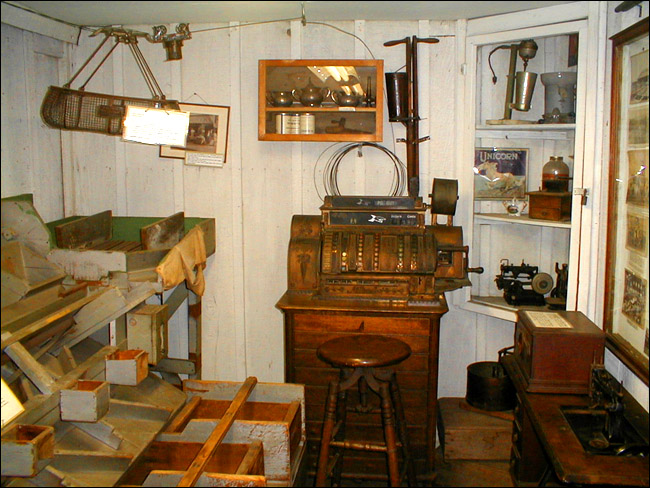 Here's a close up of a label of the "orange crate" sort, sort of a retro California art that I love. Also, a pretty cool old coffee grinder and an old jar for Hills Bros. Coffee... 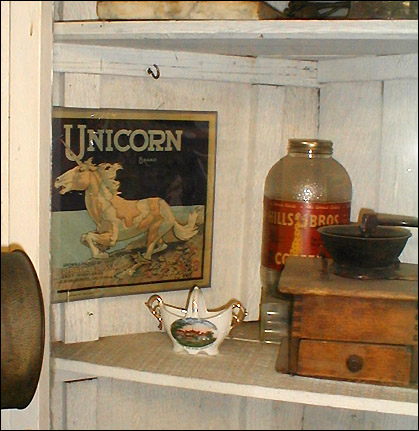 More orange crate art and some instruments of torture, possibly for torturing olives or leather or horses or something, I'm not sure....but it all looked very cool. You should totally visit next time you're near Ontario! 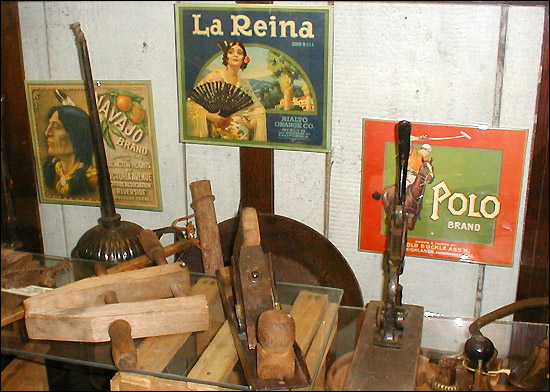 There's a bit of my reflection in this picture, but for taking a picture through a plate glass window into a darkish room with no formal photorgaphy training, I thought it turned out pretty well. The Vat Room, obviously.... 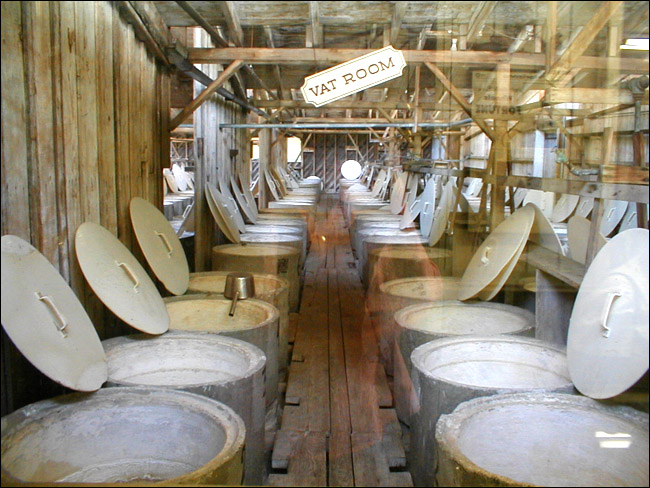 I just liked this tree. It might be an olive tree, I really don't know, as it turned out I never specifically looked to see which were olive trees. I liked the little bird feeders in it though (available in the gift shop ^_^) 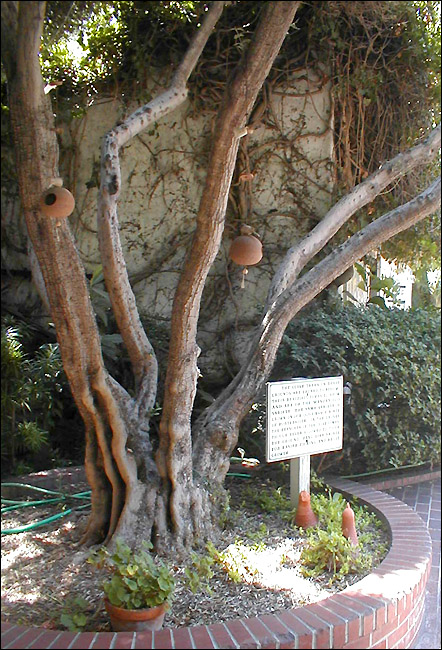 Sometime before or after taking this picture we found the cache. Well, technically Dad found the cache. Somewhere Martin had already looked, too. He seems good at this, I hope he gets into it, although I doubt it. This picture is a closer one of the olive press, a little bird feeder thingy and a big old wagon. 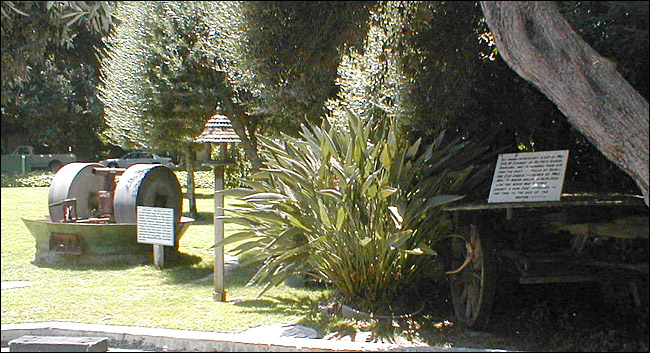 And here's my dad and two total strangers in the gift shoppe. It was already pretty warm so the gift shop was QUITE the respite. They had free olives to taste and a GREAT bunch of books for sale. Although there weren't many, they were all California art and photos and history stuff, just the sort of thing I like. The shop specialized in foods, but I liked the books. 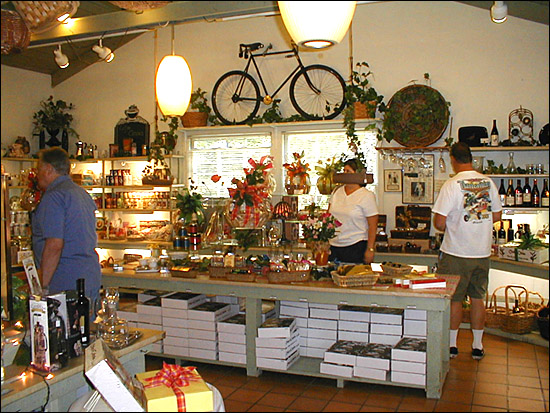 I also liked the flowers, which they had many of. These are some of those tiny white daisies you see so much of. 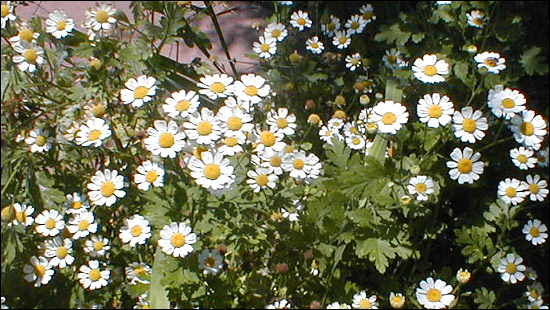 There were a couple of really pretty peachey gladioli that I liked as well. I tried to get a picture but the thin little willowey things were constantly a swayin in the breeze, so this is the best shot I got.

This bunch sat pretty still, which worked a lot better. Here's a big wagon full of colorful flowers...it was WAY too picturesque not to snap a keeper of. Ain't it nice?? 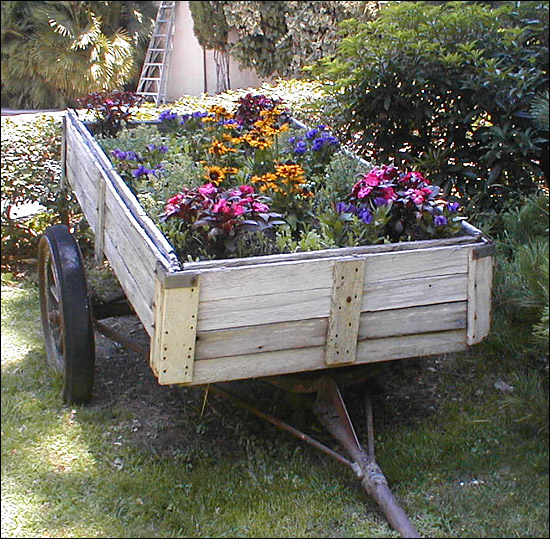 On the way out, just a quick shot of the sign stating how old and historic the place was in front of a huuuuuuuuuge old tree. 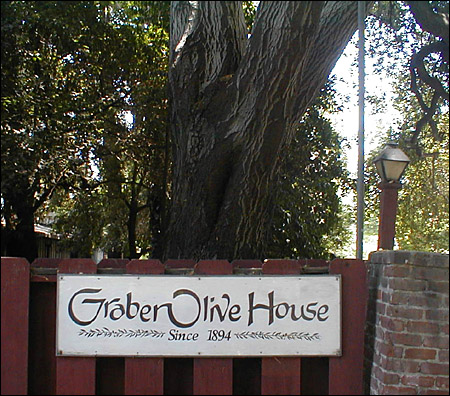 Before we headed to the next place, Lydia wanted to stop by her daughter Rachel's place (my stepsister) since we'd never seen the place and we were mayyybe a block away? This next picture isn't her place, but directly across the street from it. There seemed to be a Cute Yard Competition going on in the neighborhood. When we got there Tony, my step-brother-in-law, was working on the yard trying to get it into the competition and while Lydia was checking to see if Rachel was decent, I snapped this of the opposite yard. How often do you see multiple topiary and working fountains in small suburban neighborhoods? 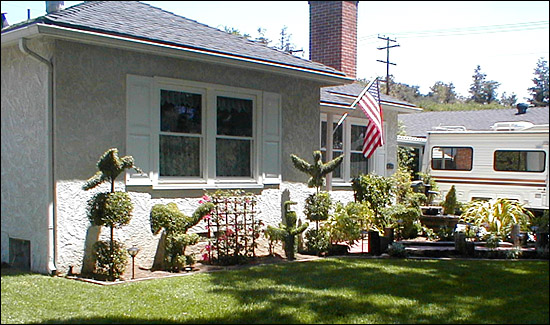 Rachel wasn't decent and wasn't going to be for a while so instead of a couple pic, this is Tony in front of their yard, all sweaty from working in it. I know how often y'all have been saying "Hey, when are we going to be seeing pictures of your step-brother-in-law?" so this is for you, guys... 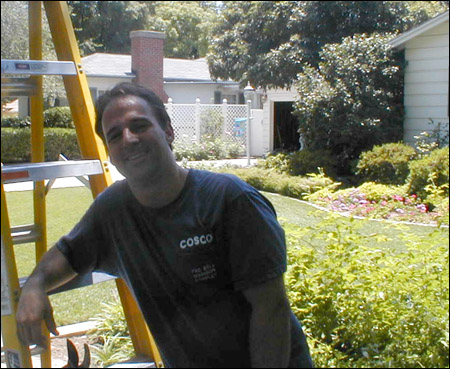 Our next stop was Madonna of the Trail #12, our first Virtual Cache. For those of you not in the know, these are ones where you have to prove you found the place or made it to the cache, but there's nothing to sign. The picture has part of it blurred because it's part of what you need to prove you've been there. This is Martin holding the GPS in front of the virtual cache, which is a statue dedicated to the mothers who came across in the covered wagons through buttloads of horrible hardships. Go, them! 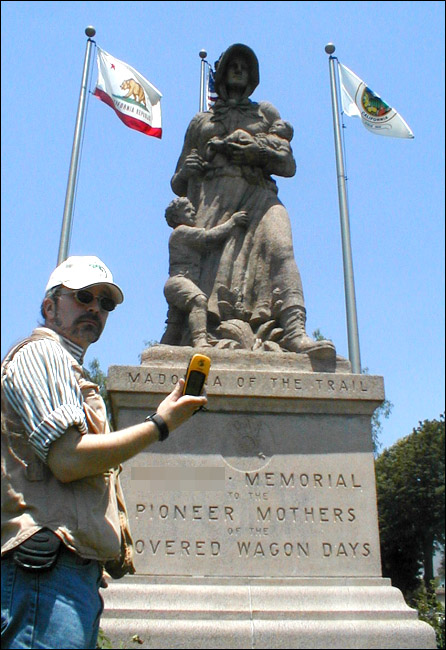 A better picture of the whole thing.... 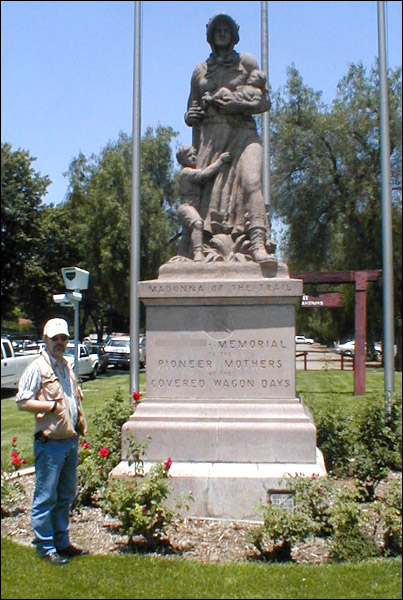 Dad has a big fake crow in his back yard. I thought it was just one of the coolest things I'd seen in a long time. So here, now you can see it, too! Woot! 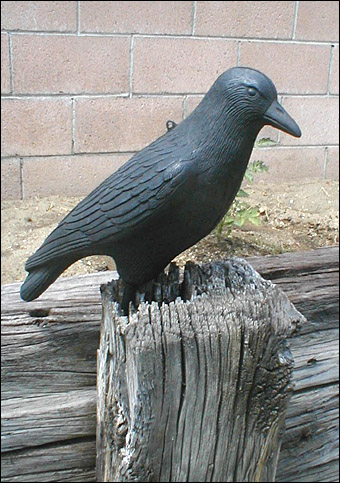 Have you noticed I always suck at wrapping up these sorts of pages? Most people expect some sort of witty wrap up or poignant thought or suchlike, and I suck at that. So that's it. End of page. Comment on my livejournal.